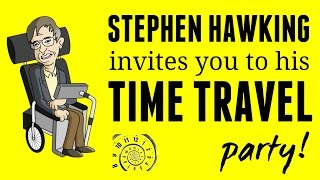 In June 2009, Prof. Stephen Hawking held a party at the University of Cambridge. He waited for a long time in a room filled with champagnes, decorations and food. But no one showed up. Why would anyone miss a party that’s hosted by one of most renowned physicists living today? It’s because he didn’t tell anyone about the party until it was over. After the day of the party he printed invitations for all the time travellers of the future. In fact, the invitation is still open. If you have the ability to travel back in time, you could still make it to the party. But I said, no one showed up to the party, right? If someone in the future had access to a time machine and went back to the party, we would have heard about it? Which means … actually, it could mean a lot of things.

This is the oldest time travel paradox. If time travel at some point in the future becomes a reality, if it is in fact possible, then why is our history not filled with examples of that? This could mean a pair of jeans from pre historic era, or a photo of a person with a Samsung Galaxy in 1948. Why does everything seem normal? This is essentially the same question as why did no one show up to Prof. Hawking’s party? Daily Mail UK in July 2012 ran an article about this time traveller’s party, which listed all the possible reasons for which no one showed up to the event. The article only had a list of the reasons. But today, we are going to look at all the reasons and discuss them one by one, in detail.

I also have couple more reasons that were not listed in the article. Reason number 1: Time Travel is not possible. This is the most disappointing reason of them all. It means that all those time travel books and movies were just a dream. One of the reasons why time travel is so fascinating is that the fact that‘s such a wild theory is even remotely possible. In a way, we are all travelling through time at a rate of 1 second per second. Actually, Einstein’s theory of special relativity proves that time travel to the future is possible when you travel closer to the speed of light. But, what about the past? How would you travel to the past and attend Prof.

Hawking’s party? Well, there’s always Wormholes. Even Stephen Hawking himself believes that travelling to the past through enlarged wormhole is in fact, theoretically possible. There’s also a scene in Interstellar, which explained it pretty simply. “Let me show you how it works.” “They say, you wanna go from here to there. But it is too far, right?” “Hmm mmm” “So, wormholes bend space like this, so you can take a short cut through higher dimension. Ok, to show that they turn three-dimensional space into two dimensions, which turns a wormhole into two dimensions, a circle. What’s a circle in a three dimension?” “Sphere” “Exactly!” But the problem is, to manipulate a wormhole into creating a passage through time, requires immense amount of energy, energy equivalent to that of an exploding star. There’s not even a foreseeable future where humanity could harness such a massive amount of energy. Climate change, wars, pollution, anything could kill us before reaching that stage.

So maybe humanity will be extinct before even getting to a point in time where time travel is possible. Even if we manage to survive; there are a number of problems associated with travelling through wormholes including severe radiations, sudden collapse and contact with dangerous and exotic matter Reason number 2: It is only possible to move forwards in time and not backwards. This could be a perfectly good reason as we can very easily imagine a futuristic pod, which travels closer to the speed of light resulting in a jump into the future. Actually, we have someone among us who is already a time traveller. Russian Cosmonaut Sergei Krikalev has spent more time in orbit around the earth than anyone else in the world. 803 days, 9hours and 39 minutes. Due to the effect of time dilation, pointed out in Einstein’s theory of Special Relativity, he travelled .02 seconds into his own future.

So, travelling to the future seems to be very possible than travelling to the past. Reason Number 3: Time Travel can only occur from the date; a time travel machine is first switched on: It is a simple statement, but it can be pretty hard to explain. Because we would need to know what kind of time travelling machine is it in the first place. What is its principle to travel through time? But it is definitely a valid probable reason for no one showing up to the party. Reason No. 4: Time travel is possible, but no one figures out how to do it or they are simply too responsible to use it. This is a bit wild, but I can see how it made the list. As I discussed earlier, it is possible for humanity to go extinct even before we figure out a way to travel back and forth through time.

I can also equally imagine a scientist, coming up with a perfect time machine but then gets too scared about the implications. Have you ever heard about Grandfather paradox? It involves going back in time, killing your grandfather before he even meets your grandmother. If he dies, you wouldn’t even be born. So what does it do to you? And who goes back in time in the first place? Or who even invents the time machine? You can imagine how it is scary meddling with the laws of the nature Reason Number 5: We are in the original universe, before the travellers start meddling with the timeline. This is where the ‘Many Worlds Interpretation’ comes into play.

Many Worlds Interpretation implies that all possible alternate histories and futures are equally real, each having their own world. It states that there are infinite number of universes and everything that could have happened in our own past, but didn’t, is part of some other universe’s past. Probably, in one universe, dinosaurs are not extinct. In another universe Nazi Germany won the war and in another universe British Empire is still ruling India. So, in our timeline, nobody visited Prof Hawking’s party. But in another parallel universe, a group of time travellers showed up and it was a night filled with wonder and scientific achievement. Reason Number 6: The Invitation and all the evidence of the party was ruined: Something happened, we don’t have any of the printed invitations circling around, the Internet some how lost all the evidence of the fact that there was indeed a time traveller’s party, including this video.

Ok, I’m only joking. What would be the point of that? So, if you are some one in the future, watching this video which is the only thing you manage to salvage from the internet and you are just learning about Professor Stephen Hawking’s party, then I assure you that he is a really good guy and he is someone who is worth talking to, and he is a motivation for millions of people around the world. Also, The image of Stephen Hawking sitting all alone, in a room filled with champagnes and decorations, waiting eagerly for the time travellers to show up, is just too sad and optimistic at the same time. So get into your machine and go back to 2009. Here are the coordinates because Professor Stephen Hawking Cordially Invites You To His Time Traveller’s Party. What are your thoughts about time travel? Did I leave any other means of travelling through time? I would love to hear from you about time travel in the comments below.

Time travel is a massive concept. I have included some sources and reading materials in the description for you to check out. I might do a couple more videos in the future about other aspects of time travel. As usual, if you enjoyed this video, leave a like, share it with your friends so that new viewers could find this channel and most importantly, subscribe to this channel, if you haven’t already and don’t forget to hit the bell button to turn the notification on, so that you would be updated whenever I post a new video which would be every week. Thank you for watching and see you soon.